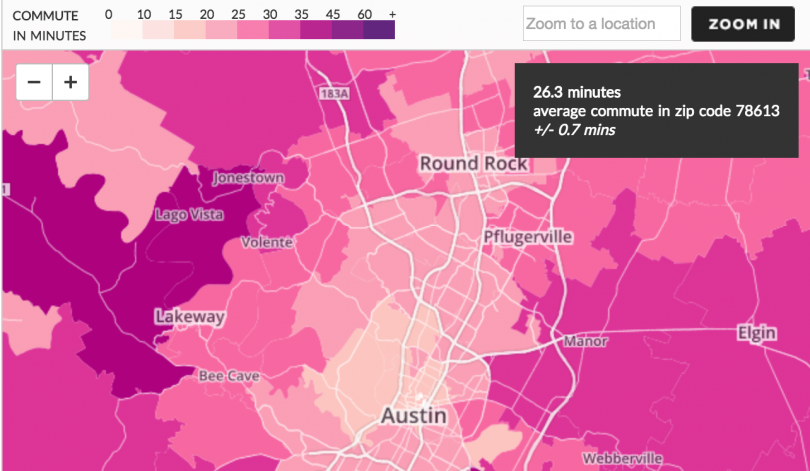 Austin has been getting a bad rap lately regarding congested roads and frustrating drive times to work. Rightfully so, as the boom in recent years has outpaced the ability for infrastructure improvements to ease the congestion. In fact, much of the road improvement on major roadways only adds to the traffic snarls.

In comparison to some areas of Austin, commute times from Cedar Park are pretty tolerable – if you work in North Austin or Round Rock. If you work downtown, you can easily take the Metro from the Lakeline Station all the way to downtown. If you work in South Austin, your traffic headaches are probably just as bad as everyone else.

This map charts the average commute times from various parts of Austin. Cedar Park lies in the 26 minute range, which is just slightly longer than the average American’s commute time. Not too bad.

The good news is that much of the growth for new and expanding companies in the area seems to be centered off Parmer Lane in North Austin and along the 45 Toll Road between Austin/Cedar Park and Round Rock. Cedar Park and Leander are also attracting small to mid size businesses.

If you are new to the area and looking for a place to live, consider Cedar Park and Leander. Not only are the commute times better than many areas of Austin, but you also get a well maintained, small town, community vibe with great schools and plenty of shopping, dining and entertainment options.

Map Made by: John Keefe, Steven Melendez and Louise Ma of the WNYC Data News Team. Follow us @datanews, email us here.
The WNYC Data News Team is part of a public radio station supported by audience contributions. If you like what you see, consider supporting our work. Base Map Built with Mapbox & Open Street Maps