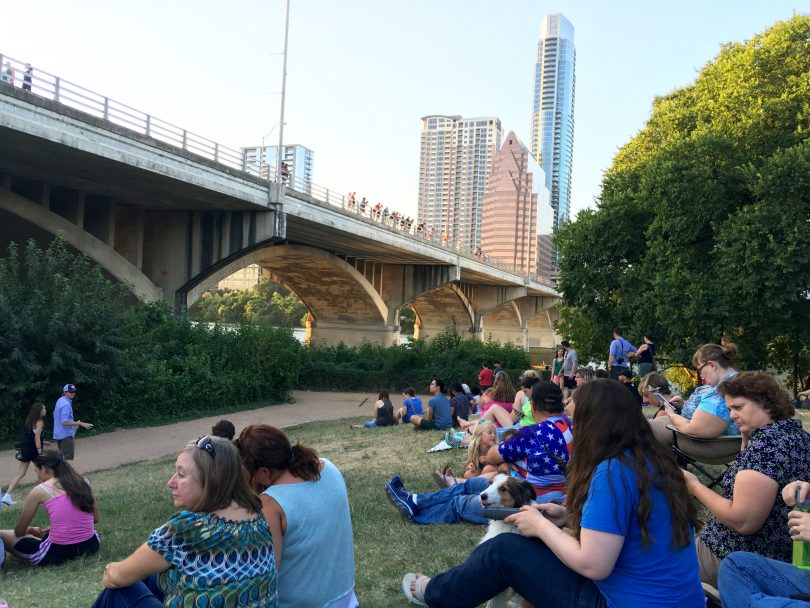 Late Summer is the best time of year for Congress Bridge Bat Watching. The Bats make their evening flight like clockwork from under the Congress Avenue bridge in downtown Austin at dusk every day. It’s definitely a sight to see.

Congress Bridge Bat Watching is something we have always said we were going to do, but never seem to actually make the effort. With family visiting from out of town, we were inspired to give it a try. We received a tip from someone that it is easiest to park in the Austin American Statesman paid parking lot. From downtown, cross over Congress Avenue bridge and then make the first left turn at the light into the Statesman complex. The parking area is to the left. There is a nice lawn area where you can spread out a blanket or bring some folding chairs to enjoy Mother Nature’s bat show. The population of the bats rises from about 750,000 to over a million during the Summer months. “Bat Season” starts around April and runs through the Fall, when the weather gets cooler. The bats migrate back to the area from Mexico during the Spring so they can nest under the bridge. The gestational period is during April and May, so the hungry bat moms are out looking for food each night, which is a great time to view them as they fly out in droves. During June is birthing season, so for a two week period, the bats tend to leave much later. Late July and early August are considered peak season for Congress Bridge Bat Watching. During this period, the baby bats have matured enough to fly out and search for food. When the weather starts to cool off, many of the bats return to warmer climates south. Although there are some that still remain, you won’t see as big of a show after September through Winter.

We were all surprised about how many bats fly out from under the bridge. We were expecting one big exit, but it went on for a good 20-30 minutes of non stop activity. The kids loved it and it’s definitely something we will go back and do again and again.

There are other ways to enjoy Congress Bridge Bat Watching. As you have probably noticed if you have ever been downtown in the evening; people line up on top of the bridge along the sidewalk and wait for dusk. There are also two river cruises that operate bat watching tours. To access the tours you can either park at the Hyatt Regency or the Statesman lot for easiest access. The dock is located just outside the Hyatt along the waterfront.

With small children, the lawn is probably a less stressful place to wait for the bats. You have to get there a little early to save a spot, as it can get pretty crowded during peak season. If you have someone to sit with your belongings, you can take the kids for a walk on the trail along the waterfront. There are plenty of things to see and keep them busy until the show starts.

We also enjoyed taking a walk after the bat flight. The Austin skyline is gorgeous at night and the weather is perfect. When leaving the Statesman grassy area, to stroll in more well lit areas, walk along the trail, under the bridge towards the Hyatt. You have to hold your nose as you go under the bridge, as that is the “bath bathroom”. For some extra fun, take the kids inside the Hyatt to ride the rocket elevators. Get out and enjoy some Congress Bridge Bat Watching before you have to wait until next year!

Download our Relocation Guide by clicking the picture below to learn more about living in Cedar Park. Fill out our Home Buyer Questionnaire here if you are considering making a move to the Austin Metro area. 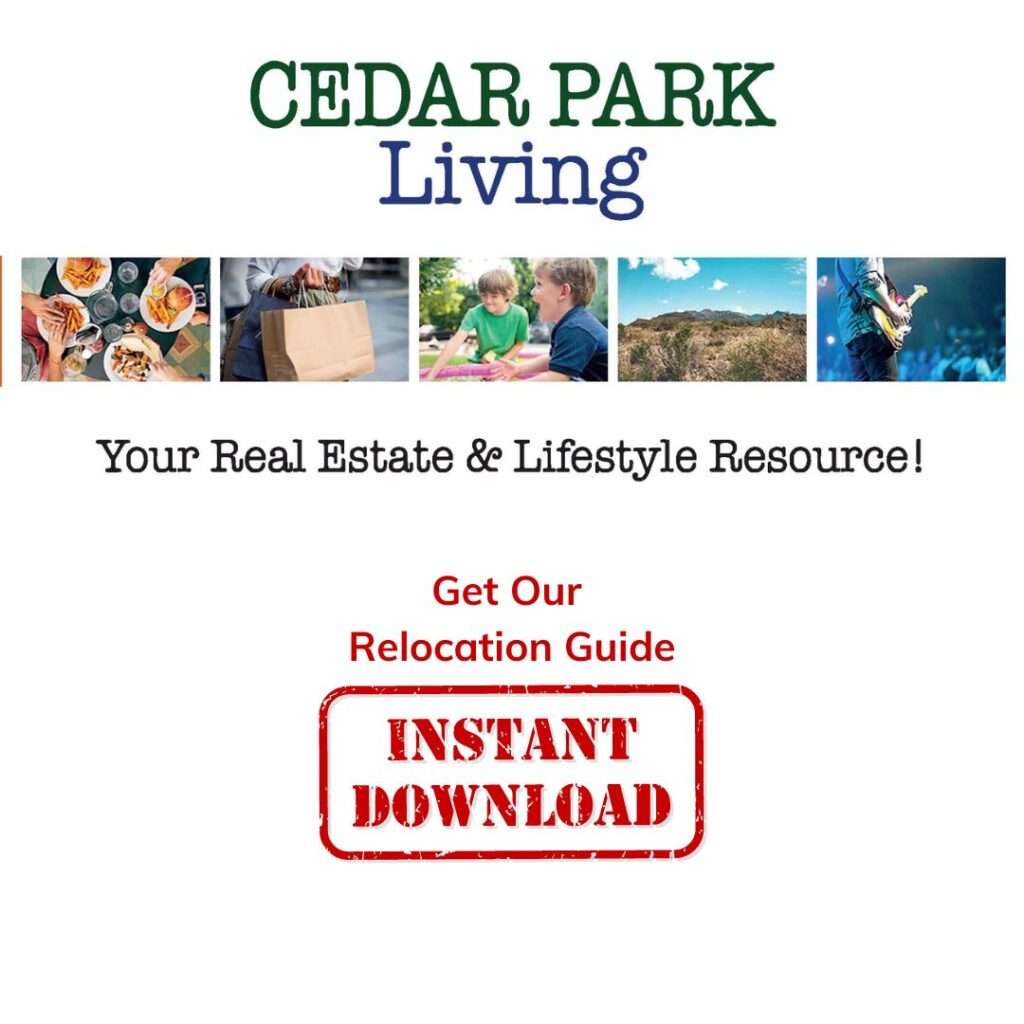 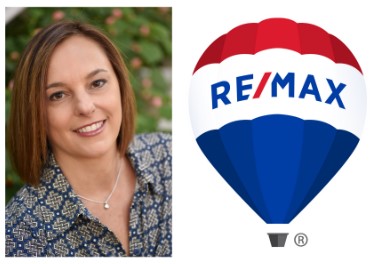 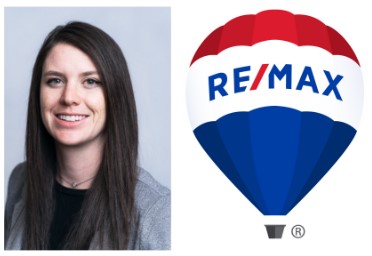 We look forward to working with you!

s neena
We highly recommend Christina! When it came to finding the ideal property for us, Christina went above and beyond and demonstrated 100% commitment to finding the right home to fit our lifestyle needs and timeline restrictions. Her area and market knowledge and client-centered attitude won us over-- and we felt like we were in competent and caring hands throughout the whole process. Christina listened to us; explained the stages all the way; offered suggestions; was easy to understand; and resolutely negotiated on our behalf to ensure overall satisfaction. To sum up our experience: Christina was very client-centered, professional, friendly, thorough, diligent, patient, kind, and very accommodating! We will definitely contact Christina again if we need realtor services in the future!

supermommichele
Christina is nothing short of Amazing!!!! She did anything she could to help me find the right rental house in this difficult market we are in right now! I am so happy I chose Cedar Park Living! Moving to Cedar Park/Leander?? Call Christina!!

Amanda Thomas
I was moving from LA to Austin, so trying to find a place to live long distance can be challenging. Thankfully, Christina Legrand was incredibly easy to work with. She was kind, prompt, and very communicative. I don’t know if I could have done this without her. I just moved into a beautiful home in my price range today and I couldn’t be happier. Thank you!

Joanne Cramer
Not enough words to describe the pleasant experience we had with Christina Legrand finding our home. Her knowledge attention to detail thoughtfulness is beyond words. Being that we did not live in the area, she helped us through every process to get our home closed smoothly.

Pamela Henderson
I give Christina Five Stars. Christina was extremely helpful and was in contact with me every step of the way during the sell of my home. She went above and beyond my expectations! ⭐️⭐️⭐️⭐️⭐️ I highly recommend her if you are looking for a dedicated and knowledgeable Realtor.

Brenda Eastman
Christina Legrand is in a league of her own when it comes to realtors and snake wranglers. (More on that last part later!) I was  out of state, when I needed to find a realtor to sell my Cedar Park home.  But who?  Substantive reviews for SELLING your home seemed scarce. I interviewed 4 Texas realtors. I chose Christina because of her immediate attention to my situation, with a detailed, organized, WRITTEN  approach that got the sale moving before I even met her!  Later, like Robert Frost, I would say, I chose Christina Legrand and "that has made all the difference." Christina is a Phi Beta Kappa in realty: professional, attentive, efficient, responsive and smart. That she is also inordinately compassionate and committed to her client, is striking. She takes pride in the quality of her work, ENJOYS helping her clients get the  most successful outcome .As a bonus  Christina is well educated, experienced, an enjoyable colleague for your venture. Her style is to quietly say, or text, , "Here is something you might consider.". No pressure, but you have just been given an excellent tip! When you raise a question, you get an immediate well researched answer, not fluff. There's also her writing. Read some of her exceptionally written property descriptions. Imagine how she will portray yours! My luck in choosing Christina soon became obvious. As I began to drag behind on the packing, I turned to see Christina taping up boxes! She was packing the kitchen !  ..the paintings! the living room!  She and her team sold and donated furnishings for me. Organized for the moving truck! Unheard of. As I was heading to the airport, we suddenly discovered water damage in the wall!  Well connected,  Christina found all the best vendors for repairs and restoration. Then, while I remained out of state (!), she closely supervised , upheld high standards for repair, and for the integrity of the home sale. A huge unexpected burden over several months for her, which she accepted with grace, and I am deeply grateful.  Because of her integrity, I'd have confidence purchasing any home that Christina represents.  And I would want her as my Buyer's agent.. Snake wrangling? Late one evening I entered the garage, and watched a large snake at the back wall, slithering into my boxes of stored stuff.  No snake relocator was available. .But the following morning, "Ding Dong"!  Surprise!   Christina stood at my door, holding up her Western boots. "I brought my snake boots!" , she announced with a laugh, and led the way to the garage. When you work with Christina, you respect and admire her, and sometimes you adore her. She's a saint. Call her. You're lucky she's out there.

Danette Roehrig
Our son headed out to college so it was time for us to downsize in size of home & mortgage. Christina had our best interest in mind every step of the way. She always kept us on track of our goals. She was super patient. Christina always made us feel like we were her priority even when she was working with other clients. She went above & beyond so many times. She successfully found us a home that met all of our goals in a fantastic neighborhood. Even after her work was completed she checked in on us & offered help. Christina knows her stuff along with today's crazy real estate market. She was a pleasure to work with and is an all around wonderful person. She is highly recommended.

Lara McCoy
Christina was so great and very patient with us. We had some challenges but, She always fought for us and helped us finally find the perfect house during this crazy market! She has such a great sense of humor which I loved about her and a very down to earth personality. Very professional and knowledgeable about the area. I will highly recommend her to friends, family and anyone that needs guidance and support through this process!

Robert Katsikaris
Christina and team were exactly what you want. They made a stressful experience smooth and gave us the support that we absolutely needed. Christina and team gave great advice and was a major factor in my house selling. Without their expertise and support the process would not have been as smooth as it was. I would absolutely work with them again.

Cameron Shears
Christina represented us as sellers and she was amazing. She was organized from the start, giving directions on how to prepare and present our home for photos and showings. Listen to her advice, she knows what she's doing. Her marketing, reach and presentation of our property was fantastic. During the sales process she kept in regular communication, making sure we were prepared for each step. Christina and her team were great to work with, they made the process easy. I highly recommend Christina if your looking to sell or buy in the Cedar Park area.
Google rating score: 5 of 5, based on 30 reviews